Any experienced traveller will understand that although we are all members of the same species, people in different parts of the world exhibit different norms, behaviours, beliefs and customs. We sometimes refer to this as their ‘national identity’ or ‘national culture’.
One of the most comprehensive evaluations of national culture was carried out between by Professor Geert Hofstede who examined how national culture influenced values in the workplace. He initially identified six dimensions to national culture; Then, using data from IBM employees operating in over 70 countries, he then set out build national culture profiles. Figure 1 identifies the results of his analysis based on a comparison of individuals from Japan, the United Kingdom, South Korea, Singapore and China. 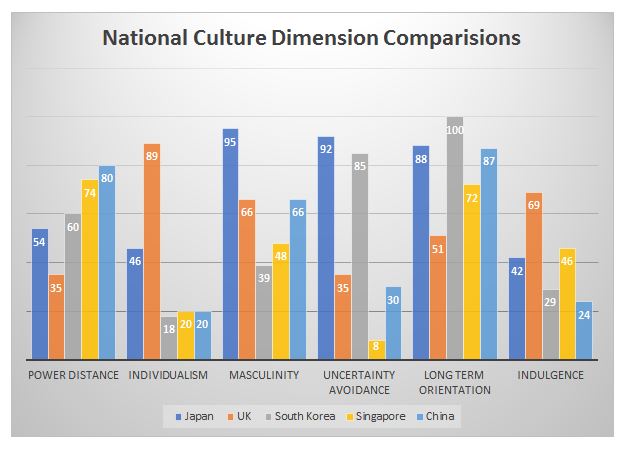 Whilst this was a limited sample, the results feel intuitively ‘correct’, and support my personal exposures to the respective cultures concerned.

In China, there is the greatest acceptance that there is a hierarchical order to which everyone must adhere. This is also true for Singapore, South Korea and to a lesser extent, Japan. The UK however do not recognise an established order. Whilst the notion of a lower, medium and upper social class is still there, it is by no means as prevalent as it was.

Similarly, China, South Korea and Singapore place a very high emphasis on collective wellbeing, as opposed to individual wellbeing. Both the team and the individual are equally important to the Japanese whilst in the UK it appears to be a case of everyone for themselves!

The implications for audit

These cultural profiles are important. They should alert the auditor to the fact that they need to modify their audit style based on the accepted culture of their auditee.

The need for cultural awareness is recognised in arguably the most important ISO standard relating to the audit profession, ISO 19011 – Guidelines for auditing management systems. Clause 7.2.2 of ISO 19011 sets out the desired personal behaviours for management system auditors. Included alongside familiar characteristic such as being ethical, diplomatic, perceptive, and versatile is the requirement to be culturally sensitive, i.e. observant and respectful to the culture of the auditee.

It could be argued that being respectful to the culture of the auditee has become more challenging since the introduction in 2011 of annex SL based management system standards. At best, there is certainly now more scope for organisational tension. Why is this the case?

Annex SL provides guidelines for those who write management system standards. It requires them to adopt a fixed high-level structure, identical core text and common terms and definitions. Within the identical core text are requirements relating to those who lead organisations. Annex SL defines top management as ‘the person or group of people who directs and controls an organisation at the highest level’. These individuals now have activities assigned to them that they cannot delegate, they must carry these out themselves. The majority of these activities are related to taking ownership of the management systems they manage, and promoting the value of the management system to the organisation’s employees.

Because top management now have these incumbent responsibilities, there is a requirement for both external and internal auditors to audit top management in order to ensure that they are properly carrying them out.
In the UK, whilst the internal auditor may be nervous at the prospect of auditing a member of the Board or indeed the CEO, there is nothing culturally to prevent this from taking place. In Japan however, the very notion that the CEO or Board can be challenged in respect of their performance of their duties is quite alien.

Nevertheless, these standards require such challenge, it is not optional for those wishing to retain their ISO certificates. Also, it will be necessary for internal auditors to record the outcomes of their audits of top management in order to evidence that a review has taken place. This may prove even more sensitive culturally than conducting the actual audit itself.

It will be very interesting to see how the relationship between the top management and the internal auditors of Japanese organisations develops over the next few years. Eventually I would expect the Japanese willingness to embrace challenge moving towards that of the UK, however if the Hofeste profile is correct in respect of long term orientation, this isn’t something that will be happening imminently.

The Hofstede profiles may also help to explain why auditors from different countries exhibit different audit styles and why auditors who perform well in one country perform less well in another.

An auditor’s audit style is heavily influenced by the environment in which they are routinely performing their assessments. Where audit activity is limited to a single location the auditor is likely to have a solid appreciation of the national culture that is in effect. For novice internal auditors operating in group structures which span national boundaries however, there are potential dangers. Behaviours which are considered the norm in some parts of the world are completely unacceptable in others. The issue of accepting gifts is one such instance.

There are national cultures where it is seen as perfectly reasonable to offer an auditor a gift and for that auditor to accept it. Indeed should the auditor refuse the gift then this would cause the giver offence. In other national cultures, the giving or receiving of such gifts would be frowned up. Political and religious sensitivities must also be appreciated as both have the potential to get you into serious trouble, fast.

For this reason, all of the major professional bodies certifying internal and external auditors have put in place Codes of Conduct which set out on a global basis those professional standards which their members must adhere. These Codes seek to clarify how an auditor should act when faced with potentially sensitive situations, irrespective of where in the world they may be operating at the time.

For auditors who are fortunate enough to be provided with an opportunity to audit in an unfamiliar country it is strongly recommended that the necessary research into national culture is undertaken first. This should be viewed as an essential part of the audit preparation. If you are familiar with the local customs and courtesies of your hosts you will create a much better impression. Embrace the diversity.

So far we have considered the impact of national culture on audit however even within a single nation significant differences in culture can be observed when comparing one organisation to another. Whilst there is no universal definition of organisational culture one that is often cited is ‘the way we do things round here’ (McKinsey &  Company 1966)  An alternative definition was provided by Professor Gerry Johnson, co-author of the Cultural Web, who stated organisational culture is “the taken for granted assumptions and behaviours that make sense of people’s organisational context and therefore contribute to how groups of people respond and behave in relation to issues they face”.  In other words, culture is the ‘glue’ that binds strategy to outcomes.

This relationship is recognised in ISO 9004 - Managing for the sustained success of an organization - A quality management approach, an international standard which provides guidance on achieving sustainable success through quality management. It can be applied to all organisations across all sectors and it outlines the importance of self-assessment to identify areas of strength within an organisation and areas where improvements can be made.

ISO 9004 reminds us that every organisation is defined by its identity and context, and that its identity is based on its mission, vision, values and culture. These four elements are inter-related and dynamic, so a change in one will impact one or more of the others. The standard then proceeds to define culture as ‘the beliefs, history, ethics, observed behaviours and attitudes’ that is exhibited.

The importance of aligning the organisations culture with its mission, vision, and values is stressed, a task which is entrusted to Top management. This process starts with the identification of any external or internal issues that could impact the organisation’s ability to achieve sustained success. This learning is then used to inform the content of the mission, vision and values. Next, top management should evaluate the organisations existing culture and assess whether there is a need to change this in order to ensure that the mission, vision and values can be realised. ISO 9004 reminds us that this should not be a ‘one off’ exercise but should be repeated periodically and in all instances when one of the four elements changes. In such instances, changes should be communicated both within the organisation and to relevant interested parties as appropriate.

The role of the internal auditor here is to support top management in the evaluation of organisational culture. It is to gather the necessary insight to allow top management to achieve the mission, vision, values alignment. But how is this possible?

Auditing organisational culture presents many challenges, not least because culture is not something that can be directly assessed. Instead auditors need to feel comfortable assessing ‘indicators’ of culture.
As well as examining objective evidence this will also require the use of an auditor’s ‘professional judgement’, the ability to determine the degree of reliance that can be placed on information which is not 100% verifiable.
Whilst there is no definitive list of indicators of culture, an assessment conducted by the ThriVinci Consultancy Group suggests that auditors may wish to seek answers to the following;

The first approach was to incorporate a requirement for an assessment of culture into each individual audit in the audit programme, through techniques like root cause analysis, identifying why issues occur and how they can be the drivers for wrong behaviours, and to then join the dots across all individual audits in order to identify common themes. This approach takes auditors beyond a traditional focus on processes and controls requires them to be comfortable combining objective and subjective evidence (the latter being based on their feelings).

The second approach involves auditing personal behaviours as a specific audit across the whole organisation as a proxy for culture. Here the key question for internal audit is how best to gather evidence to show that culture and values are at the heart of every business decision and are being incorporated, for example, at every level in recruitment, training, performance management and reward arrangements.

The CIIA identified that the latter approach was less common, but, over time, it may become the more widely adopted. Irrespective of which method is adopted to identify organisational culture the essential requirement is that this is done.

In order for an organisation to achieve sustainable success its mission, vision, values and culture must all be aligned. Internal auditors have an essential role to play in determining whether or not this is the case. They must use both objective and subjective assessments of the activity within the organisation to reach their conclusion prior to feeding back their determination to top management.

There will be times when auditors are required to operate in cultures which are alien to their own. If they are aware of this they should carry out the necessary research in advance and should modify their audit style and behaviours accordingly.

The opportunity to audit in different national and organisational cultures should be embraced. Such valuable experience serves to make a more well-rounded auditor.

In the next article in the series we consider the role that internal auditors should play in organisational governance.

Governance represents the heart and soul of an organisation. It embraces what the organisation stands for, its purpose and beliefs. Given that many of an organisation’s stakeholder groups will rarely, if ever, have direct access to the business it is important that they can rely on internal auditors to act as their advocates. But what must auditors do in order to provide stakeholders with the necessary confidence that they are competent to undertake this task?