During an assessment the audit team may identify non-conformances within your system and require you to complete a non-conformance report / corrective action plan - lets address this in more detail... 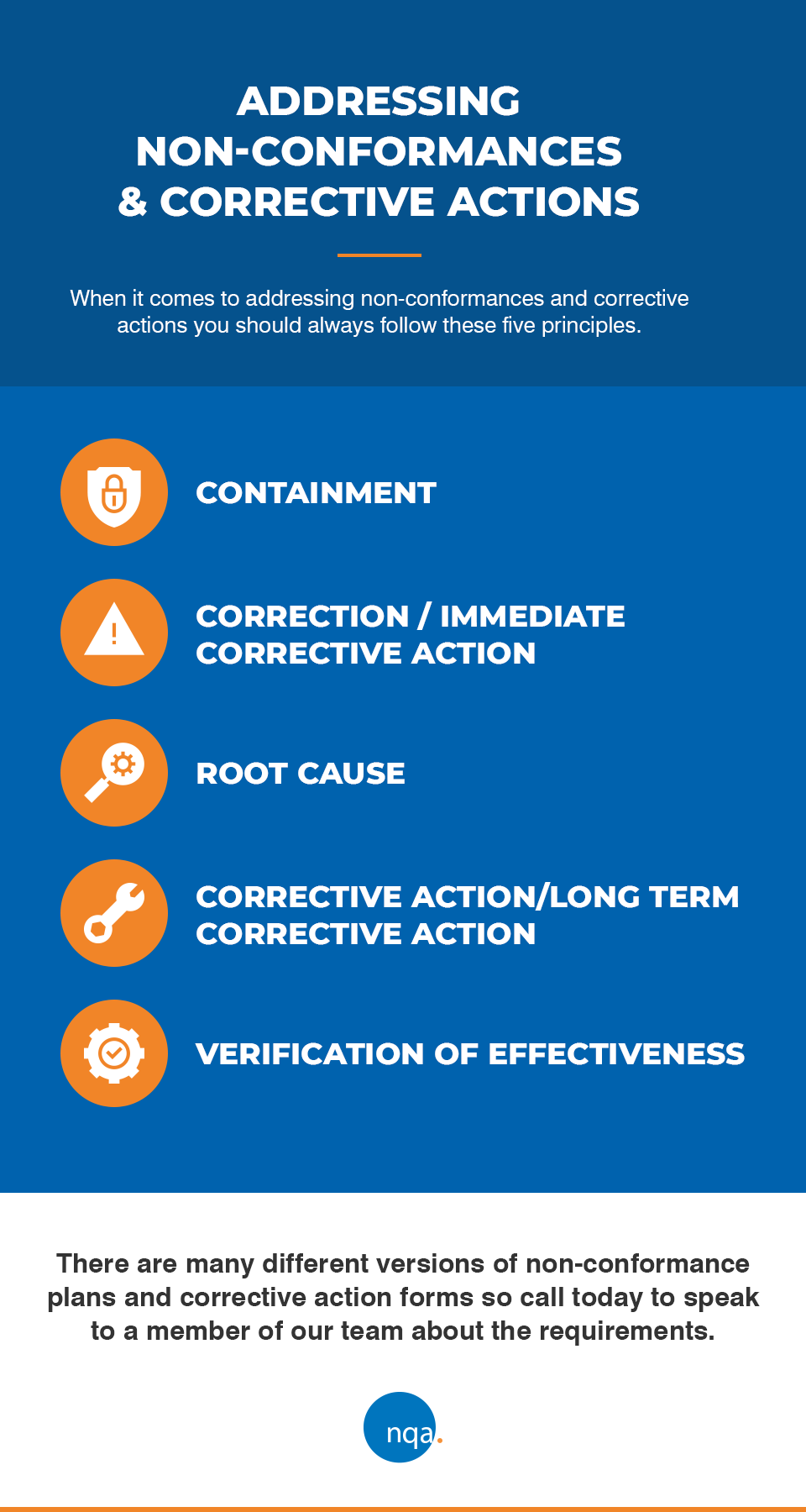 There are many different versions of non-conformance plans and corrective action forms and some may require more information to be documented over others, however, when completing you should always follow the same principles when taking corrective actions:

Whether the corrective action plan requires it to be documented or not, any non-conformance should have containment action. This is a quick response to “stop the bleeding” and is generally taken within 7 days or sooner if a product is about to be shipped out the door. This may also include alerting a customer depending on the nature of the non-conformance, quarantining an item or an immediate review of a procedure.

This step is similar to containment but it should be used to plan out the actions you are going to take to in order to bring the product or process back into conformance. It is typically expected that this process should be completed within 30 days but sooner if there is a high risk of product escaping or if it has already escaped.

The immediate corrective action can also be classified as the first “why” when using the “5 whys technique” and would be the action which is directly causing the non-conformance.

Direct Cause “The event or action that immediately results in or precedes the nonconformity.”

A critical step which is often missed is also an assessment to determine the magnitude of the detected nonconformance. You will need to identify and isolate all non-conforming products or processes to prevent growth. If you rework one part which was not conforming do you need to also rework other parts in the same batch or are there other batches which could potentially have similar issues. The issue may also impact other parts which have gone through the same process. It may just be a paperwork issue but in any case you need to review the magnitude of the non-conformance to determine if it is an isolated occurrence or far greater.

It is also important for you to communicate to relevant parties relating to the non-conformance which may include customers, management, suppliers and employees.

As part of the immediate corrective action you should identify task steps to bring the product or system back into conformance ensuring you assign responsibilities and timeframes for each of these. Setting out what verifiable evidence is required is also beneficial as everyone will then know what needs to be done and how the action being closed is evidenced.

This is probably the step which is most commonly wrong when addressing non-conformances and if this stage is not right then the chances are that the next stage of corrective action/long term corrective action will also be wrong.

The root cause is basically the underlying reason for why the non-conformance occurred, how did it happen in the first place? You must never move onto corrective actions/long term corrective actions before the root cause(s) have been correctly identified otherwise you will run the risk of implanting actions which do not fix the problem.

The root cause statement shall be a statement of fact (or facts if there are multiple root causes) and must address basic systemic issue(s) without any obvious embedded “why” questions and you achieve this statement by performing root cause analysis.

There are many tools which can be used to identify root cause such as:

You can use any technique or tool you wish as long as it has identified the root cause fully and there are no open questions as to what went wrong. Many organisations fail to complete this process effectively which results in the corrective action plan being rejected and a majority of these rejections are due to organisations just copying what the non-conformance statement is.

For example, if a non-conformance was relating to a training record not being up to date, you do not then put as your root cause “the training record was not up to date”. This is not a root cause, this is you highlighting what we already know and we can continue asking the question “why”.

There are many different tools you can use as highlighted above and none are stipulated for use, however, the easiest to help with understanding is probably the 5 whys technique.

The idea is simple. By asking the question "Why" you can separate the symptoms from the causes of a problem. This is critical as symptoms often mask the causes of problems. As with effective incident classification, basing actions on symptoms is worst possible practice. Using the technique effectively will define the root cause of any non-conformances and subsequently lead you to defining effective long term corrective actions.

5 Whys offers some real benefits at any maturity level:

Often the answer to the first “why” uncovers another reason and generates another “why.”  It often takes five “whys” to arrive at the root-cause of the problem. You will probably find that you ask more or less than 5 “whys” in practice.

How to Use the 5 Whys

The 5 Whys can help you uncover root causes quickly. However, making a single mistake in any question or answer can produce false or misleading results. You may find that there is more than one root cause for each non-conformance; corrective actions should be implemented for each of these.

To validate those potential root-causes that are under your control, you can apply the following validations to your answers or root causes. Ask the following questions for every possible root-cause you identify at all levels of the 5 Whys:

Non-conformance
“Components are being delivered late to our customers.”

Why were we unable to meet the agreed-upon timeline or schedule for delivery? The job took much longer than we thought it would.

Why did it take so much longer? Because we under estimated the complexity of the job.

Why didn't we do this? Because we were running behind on other projects.

Why are we running behind on other projects?  We do not allow enough manufacturing/lead time when issuing quotations to our clients.

Why did the equipment fail? Because the circuit board burnt out.

Why did the circuit board burn out? Because it overheated.

Why did it overheat? Because it wasn’t getting enough air.

Why was it not getting enough air? Because the filter wasn’t changed.

Why was the filter not changed? Because there was no preventive maintenance schedule in place informing the operator to do so.

You should never raise a corrective action that does not use the root cause as the input to the plan. As an example, if the root cause is “We do not allow enough manufacturing/lead time when issuing quotations to our clients”, your corrective action should not be to get the maintenance manager to increase the filter changes.  That address your root cause relating to lead times.

Just as you would in the immediate corrective action section, you need to highlight the tasks to complete in order to implement the corrective actions, who will be responsible, when the task will be completed and using what methods etc. You should reference any procedures which require updating or records which need to be presented.

The length or time for corrective action can vary dramatically depending on what the long term fix will be, maybe you need some intermediate corrective actions before the final corrective action task will be completed.  By highlighting the tasks you will set out a clear plan on what will be achieved and when.

This is the final step in the process of correcting non-conformances and is used to identify the records which need to be completed or provided to demonstrate that the tasks have all been completed. Maybe this is the updated procedures, completed training records or revised drawings etc. These documents and records would be used to show that you have done everything you should have done to hopefully prevent the reoccurrence of the non-conformance.

Tip: Documents such as planning, drawing changes, training records and purchase order changes are often used as verification of implementation.

Effectiveness is often the part of the process that is forgotten or incorrectly demonstrated and can generate subsequent non-conformances due to repeat issues. You need to identify what method will be used to demonstrate that the corrective actions you have implemented are effective and you have not seen any repeat issues.

Showing that the procedure has been updated is not a measure of the effectiveness, that is your verification evidence. For example, if the non-conformance was that a training record for a new employee was not completed, the root cause may be something like “no system in place for new employees to prompt the completion of the training record”.

The long term corrective action may be to develop a checklist to use during the induction process which will alert the trainer to update the training record. The verification would be that a checklist is in place. The effectiveness is not to state that the checklist is in place and the training record is up to date, the effectiveness may come a lot later and can only be demonstrated after another 3 new employees have gone through the induction process and their records are up to date. This could be in a years time.

You should identify the method for which you are going to demonstrate the effectiveness of the corrective actions and may utilize internal audits as part of this method. Maybe you will do an internal audit every month for the next 12 months to ensure no repeat issues, if there are repeat issues then you should revisit your corrective action plan as there are issues somewhere which need to be addressed. Ensure the chosen method is highlighted and evidence is provided to demonstrate that the corrective action has been effective.

Tip: For each MoE identify WHO is responsible for the MoE, WHEN the MoE will be completed, HOW the MoE will be accomplished, and provide verifiable objective evidence for actions taken

Only when the method of effectiveness has been completed and there are no repeated issues can the non-conformance/corrective action be fully closed.